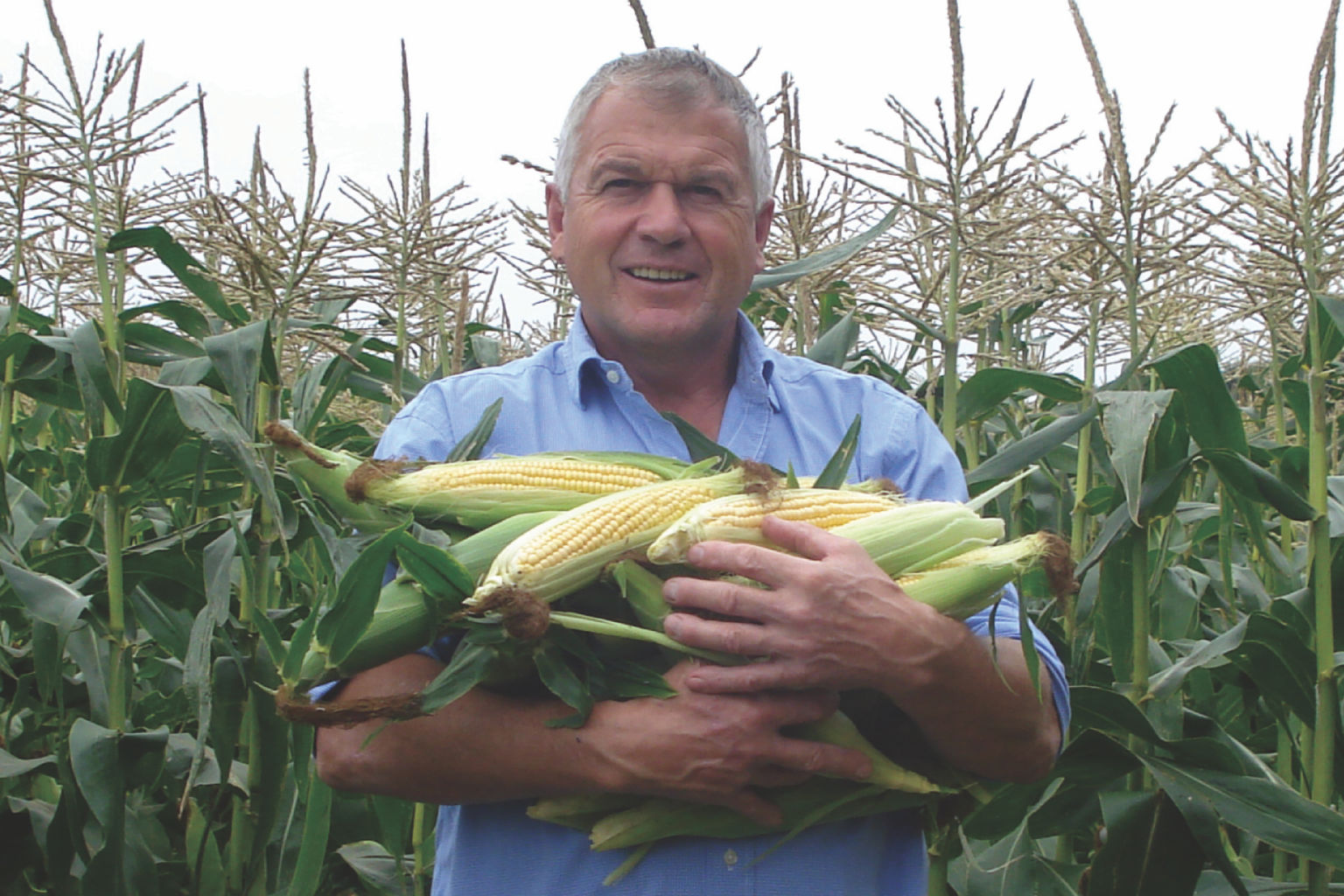 Relationships between growers and supermarket buyers can sometimes be thorny, a necessity rather than a pleasure, so when a Sainsbury’s director calls a supplier “a legend in the world of produce”, you tend to sit up and take notice.

These were the words of the retailer’s former fresh foods director Karen Schenstrom in the foreword to Peter Barfoot’s memoirs. And she is certainly not alone in her admiration for the tireless and charismatic Barfoots chairman. Last year, the sweetcorn kingpin won a CBE for services to sustainable farming, recognis- ing his passion for a wide range of environmental, energy-reducing, soil and social initiatives.

His company, Barfoots of Botley, began life in 1976 when Peter went into business with his father Victor, growing large volumes of sweetcorn, and subsequently courgettes, French beans, butternut squash and a number of other vegeta- bles. “We built up a name in the wholesale markets and were introduced by Geest Foods to pack first courgettes and then sweetcorn for Marks & Spencer,” the entrepreneurial and well-liked grower recalls.

From Strawberries To Sweetcorn

The family’s farming heritage did not start here, however, dating back to the mid-19th century when Peter’s great great grandfather started a market garden, growing strawberries in the parish of Hedge End, Hampshire. This area, known as the Hampshire Basin, enjoys a special microclimate created by its close proximity to the coast, with the Isle of Wight acting as an offshore windbreak.

For more than 150 years the area was the largest for strawberry production in Europe, with over 600 growers in the local cooperative, but eventually the rise of the retailers and foreign imports, as well as big changes in strawberry growing techniques, caused the demise of the local industry.

Strawberries were the family’s main crop when Peter was a boy in the 1950s and 1960s – he was a bit of a handful by his own admission – and Peter remembers his father Victor spending most of his time in his “strawberry shed up the field”. This was his “church and chapel” where the trays of punneted strawberries sat in neat rows “to be titillated and labelled” before being loaded onto a train bound for Scotland.

Peter’s admiration for his father is apparent in his memoirs. He describes Victor as “a very humane man” who was “grateful for all that life gave to him”. A hard grafter brought up in “austere circumstances”, Victor was also unafraid to speak his mind. Meeting two suited and booted senior M&S executives on a visit to his farm, he once remarked: “I see you don’t do a day’s work!” Fortunately, they didn’t take offence.

After attending Hampshire College of Agriculture, where Peter says he was “public nuisance number one” and a prodigious beer drinker, he saved up some money and set sail for Australia with his then wife Veida. Over in Queensland he did a fouryear stint as a ‘jackeroo’ working at cattle stations – and having a wild and adventurous time by all accounts.

When Peter returned in 1975, he joined his father market gardening and growing strawberries. Little did he know at the time that the same Hampshire Basin climate that had been perfect for strawberries, would later prove perfect for sweetcorn and a range of other vegetables, with Barfoots becoming the UK’s dominant sweetcorn supplier and one of the biggest companies in British fresh produce.

“As a young man of 25, I was full of ideas and energy,” Peter recalls, “and luckily for me, my father never did anything other than support me in his hard-working way.” After landing the supply deal with Marks & Spencer, Peter remembers how he and his father mixed and laid concrete by hand to create a yard to take refrigerated lorries.

The pair also turned a wooden tithe barn into a packhouse and used a demounted lorry body as a cold store – testament to the pair’s ingenuity but a far cry from the sleek, modern facilities near Bognor Regis where the supplier now has its head office. In the UK, Barfoots has five farms across Hampshire and West Sussex, spanning 8,000 acres.

After M&S, Tesco, Sainsbury’s and Waitrose joined the company’s list of customers, and in the early 1990s the retailers began to tell Barfoots they had to supply them year round. So it was off round the world to build a supply base. Towards the end of that decade, during a hunt for sweetcorn producers in South Africa, he came across butternut squash, a vegetable that was basically unheard of at the time.

Knowing retailers were interested in the product, Peter shipped a container back to England, where he began selling it. Fortunately for him, popular TV chefs such as Jamie Oliver and Delia Smith were beginning to include butternut squash in their recipes, helping sales take off.

It was not all plain sailing in Barfoots’ supply relationships, however. Peter recalls an acrimonious dispute with one customer at a time when the business in question was looking to reduce its prices amid intensifying competition. Victor had retired by this point, leaving Peter at the helm.

The customer requested a large advance payment that Barfoots could not afford, so Peter stuck to his guns and refused to pay. Then it got nasty. Barfoots lost half of its business with the client but soon replaced it with a different partner. “We gradually managed to rebuild our relationship and now they are a major customer,” Peter says. “We can now deal with each other as adults”.

This is something Peter has always tried to do with his children too, two of whom work for the company. “I have tried not to personally manage their development, allowing them to stand on their own feet,” he says. Peter’s eldest daughter Joanne runs the supplier’s Spanish division, Barfoots España, while younger daughter Victoria recently joined the business, learning the ropes as an account administrator.

Peter’s eldest son Jon was the company’s commercial director for a time but now runs his own veg box delivery business, and an artisan bread company called Vegbred, which makes gluten-free bread from sweet potatoes.

As well as establishing production in Spain, Morocco and Peru, Barfoots also produces vegetables in Senegal – and this farming operation, Peter says, is his proudest achievement. In 2005 he was approached by French producer Compagnie Fruitière, whose director Michael Laurent asked if Barfoots would like to do some trials growing sweetcorn in the Senegalese winter. Ever the opportunist, Peter agreed and Société de Cultures Légumières (SCL) was formed in partnership with Laurent.

What started as a small test farm is now outgrowing Barfoots’ UK farming operations. It has become one of Senegal’s largest export businesses, employing over 2,000 people and producing and packing a wide range of crops. As well as sweetcorn, SCL now grows and exports butternut squash, French beans, and chillies.

In total, Barfoots now farms 8,000 acres near Senegal’s northern coastal town of Saint-Louis. The dry and sandy land is reclaimed open bush and scrubland, and enjoys abundant sunshine, long daylight hours and a guaranteed source of fresh water from the nearby Senegal River.

But Peter points out that much of the land has never produced food in the history of the world. To the untrained eye, the arid plains certainly don’t look like the ideal terrain for vegetable production.

Ring From The Dead

Back on home soil, but away from work, Peter has also had success on the polo field –a sport he says he “became hooked on” having previously developed a love for hunting. From the age of 45, Peter invested plenty of time, money and effort improving his handicap, winning trophies and even starting his own team, which he called Maíz Dulce, Spanish for sweetcorn.

The high-adrenaline sport did not come without its risks, and Peter suffered a series of painful accidents, breaking ribs, smashing leg bones and damaging the cartilage in his pelvis. Then in 2016, Peter narrowly escaped death when a serious head injury left him in a coma with a brain bleed. He was given a 10 per cent chance of survival but somehow pulled through.

“I haven’t fully recovered, but I get by with an enormous amount of help from a very talented board of directors,” Peter says. Indeed, the company has continued from strength to strength since the chairman’s accident, investing in new sweetcorn processing facilities and seeing its group turnover rise to £193 million a year.

Peter has no recollection of the 12 weeks after his accident, other than having “all kinds of strange dreams, including going on an assisted suicide package holiday with [my wife] Angela and meeting the Grim Reaper himself”. In the dream, Death “didn’t want me”, Peter recalls, “and sent me back for another 20 years.”

Despite the severity of the accident, Peter, now 70, says he has no thoughts of retirement and is “only just beginning”.

“My head is brimming with ideas and I have a young team,” he says. “The Grim Reaper did say I have another 20 years, after all!”

Back in June 1996 Barfoots found itself at the centre of a curious murder enquiry when one of its tractor drivers ploughed up a dead body. A man had been clubbed to death with a hockey stick and buried in one of the producer’s fields.

Abshot farm in Titchfield became a crime scene, with police frogmen searching the reservoir and a white incident tent erected where the body was found.

“I spent that weekend digging my garden and I remember being surveyed by a police spotter plane,” Peter Barfoot recalls. “They probably suspected me of being the Fred West of the agricultural world!” 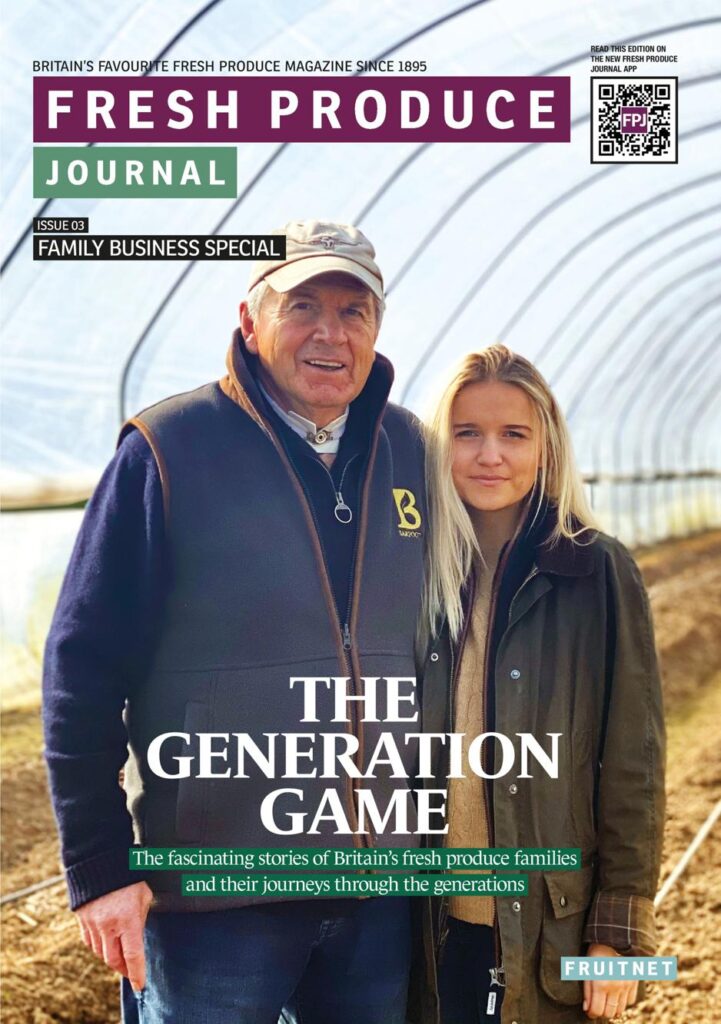 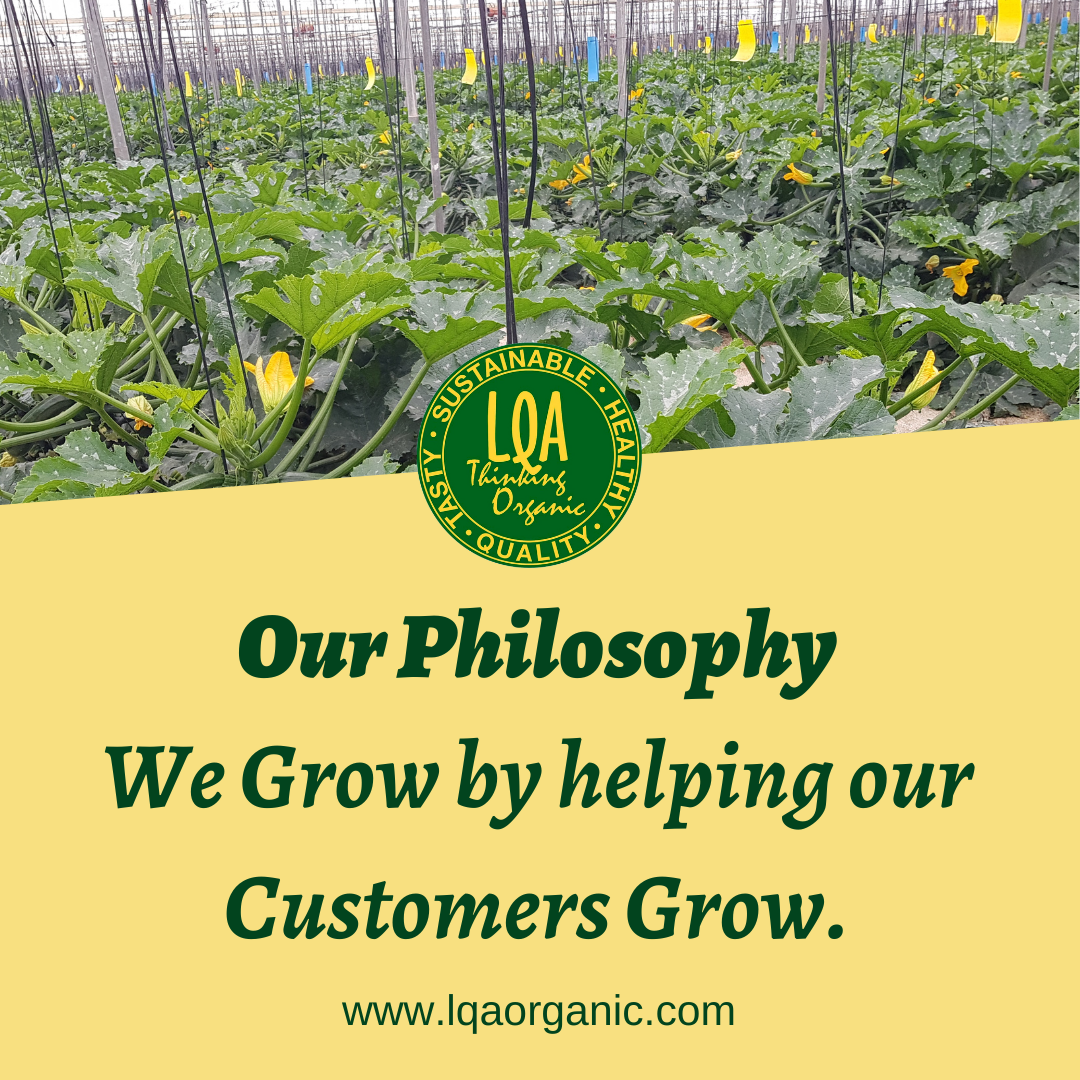 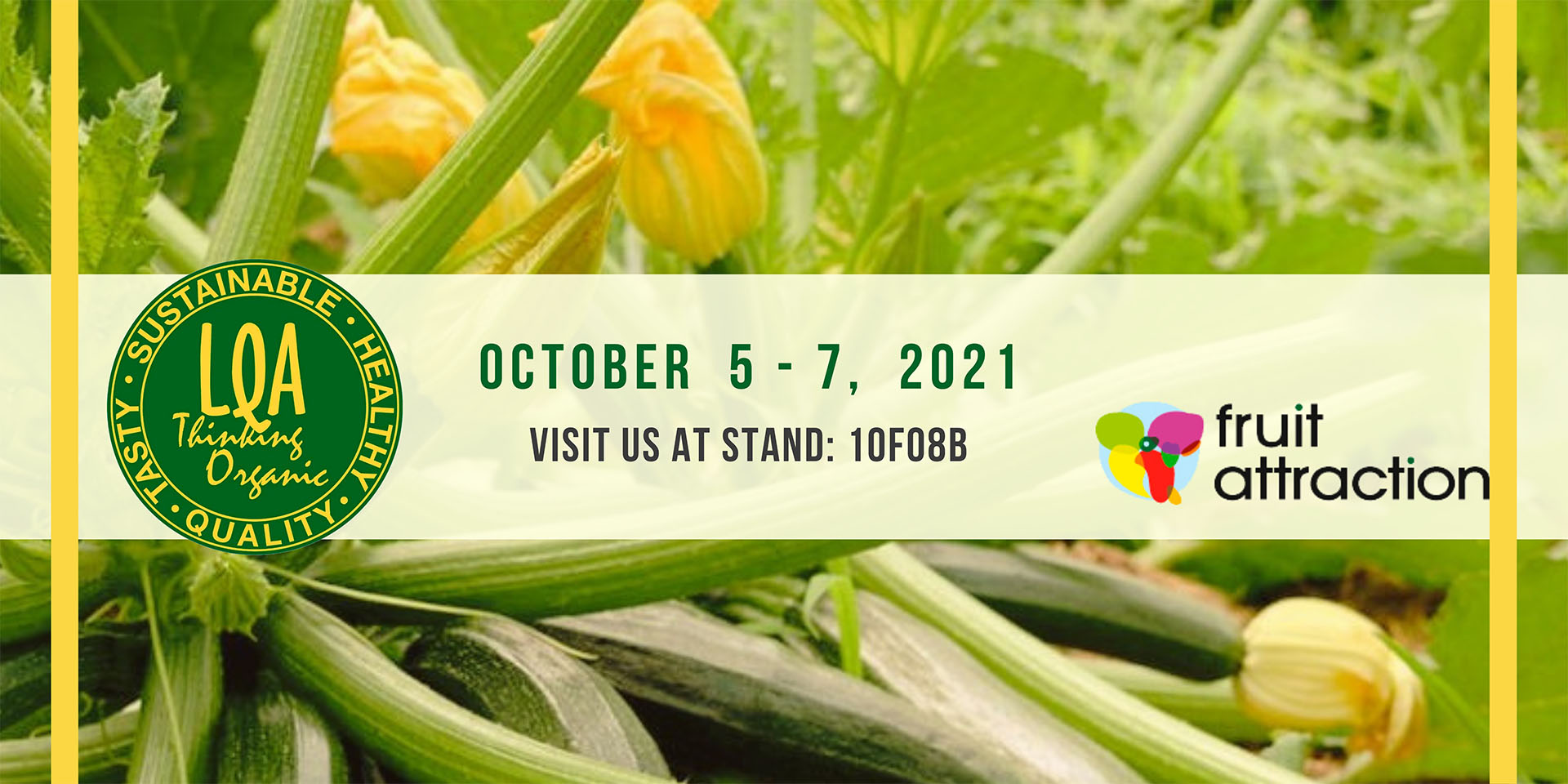 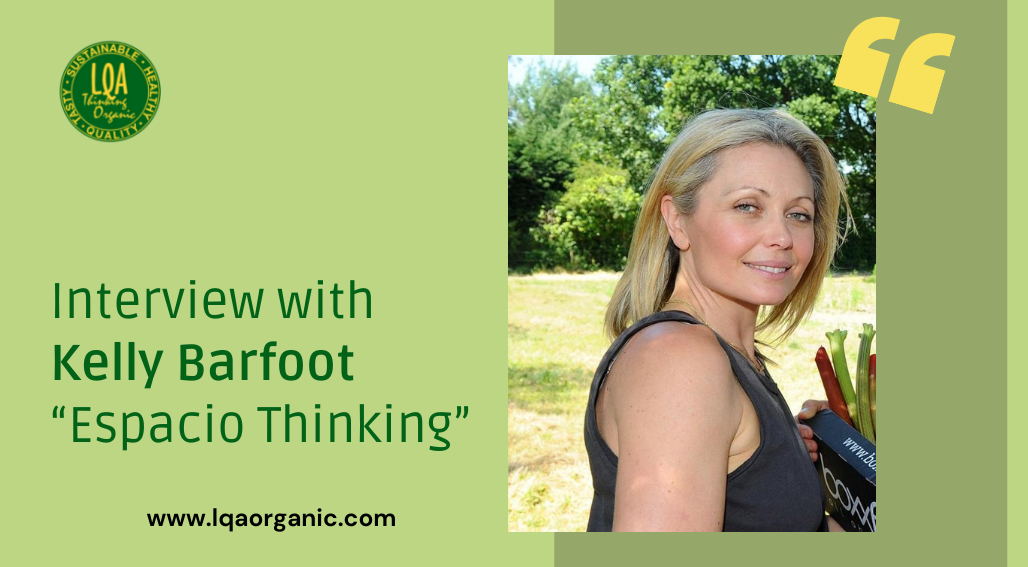 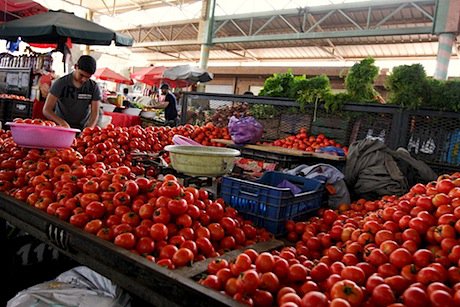